4 Ways to Book your Taxi

TOA Taxis are always trying to find new ways to improve our service. Below you will see what we are trying to improve to be the most effective taxi service in the Birmingham and surrounding areas.

We use cookies for personalisation, analytics, and for other purposes. Learn more or change your cookie preferences. By interacting with this site, you agree to our use of cookies. 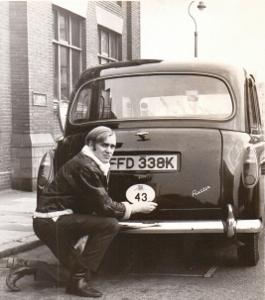 “I am very happy to have had the opportunity to thank Greg Caulwell for the contribution that he has made to the daily life of the City over 48 years. Taxi drivers are self-employed, so when they retire they don't have an employer to mark the occasion for them. I hope that by introducing these certificates Birmingham can recognise all their hard work.” Councillor Dring

TOA Taxis also awarded Greg with a certificate to thank him for his service spanning nearly half a century.

Greg, who is now 68 and lives in Oldbury, was aged 22 when he became a licensed TOA Taxi driver in 1967. Back then, the licensing fee was half a crown (the equivalent of one eighth of a pound or 12.5 pence)compared to the current licensing fee which is around £250 per year for the driver and vehicle. Road tax was around £12 per year in 1972 when Greg bought his first taxi; an Austin, at age 30. When Greg first started, there were only 175 black cabs in Birmingham – there are now around 1400 black cabs.

Throughout his years as a taxi driver, Greg has dealt with all kinds of incidents such as a heart attack victim (whose life Greg helped to save by rushing the passenger to hospital) he has served BAFTA Award winning actor, Edward Fox, and has had jobs to Buckingham Palace. Greg has fond memories of his time as a taxi driver and still holds dear his original Birmingham Hackney Carriage Driver’s badge from 1967, his Bye-Laws Handbook (also from 1967) as well as memorable photos taken throughout his career as a taxi driver. Now retired at the age of 68, Greg intends to enjoy his golden years.

“I am going to have a good rest for the time being, but the wife says she has plenty of jobs lined up for me around the house and garden. I have no regrets and have enjoyed every last minute of taking the good people of Birmingham around this great City.” Greg Caulwell

If you enjoyed this, why not subscribe to free email updates ?

Enter your email address to be notified of new posts:

We never share or sell your email address to anyone.

Enter your email address to be notified of new posts:
Subscribe via RSS:

Enter your email address to be notified of new posts: